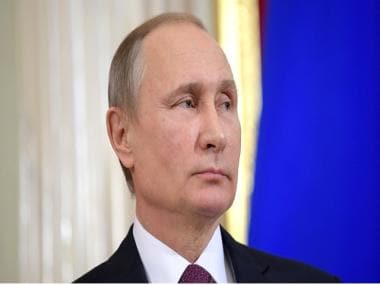 For Vladimir Putin, such an occurence fundamentally alters the risk versus reward equation when it comes to repeating his action in Crimea, were he of such a mind

Joe Biden’s statement on Monday that it ‘remains to be seen’ whether Ukraine will be admitted to the North Atlantic Treaty Organisation (NATO) might have been made keeping in mind today’s engagement with Vladimir Putin in Geneva. But that will offer little solace to Russia.

After all, as the US president and so-called leader of the free world (with due apologies to Angela Merkel) was about to begin a press conference in Brussels, Ukraine president Volodymyr Zelensky tweeted:

Commend @NATO partners’ understanding of all the risks and challenges we face. NATO leaders confirmed that 🇺🇦 will become a member of the Alliance & the #MAP is an integral part of the membership process. 🇺🇦 deserves due appreciation of its role in ensuring Euro-Atlantic security

While Zelensky did not specify when Ukraine would join NATO and Biden’s response to being asked flat out if it was joining the group was non-committal — “School’s out on that question. It remains to be seen. In the meantime we will do all we can to put Ukraine in a position to be able to continue to resist Russian physical aggression. It depends on whether they meet the criteria. The fact is they still have to clean up corruption and the fact is they have to meet other criteria to get into the action plan” — Moscow’s heart, for the briefest moment, might have skipped a beat.

But before we get to why, we first need to understand what NATO is and the concept behind it:

NATO is an alliance that consists of 30 independent member countries including UK, Canada, Spain, France, Denmark and the US (Ukraine’s staunchest ally since 2014).

NATO is a powerful grouping.  Around 2,000 satellites orbit the earth, over half operated by NATO countries, ensuring everything from mobile phone and banking services to weather forecasts. Military commanders rely on some of them to navigate, communicate, share intelligence and detect missile launches.

But it is its collective defence clause — much like The Three Musketeers concept of ‘one for all and all for one’ — that is key.

To quote from the NATO website: “The principle of collective defence is at the very heart of NATO’s founding treaty. It remains a unique and enduring principle that binds its members together, committing them to protect each other and setting a spirit of solidarity within the Alliance”.

As per Article 5 of NATO’s founding treaty states, an attack on any one of the 30 allies will be considered an attack on them all.

The group recently expanded the use of this clause, which previously applied to traditional military attacks on land, sea, or in the air, and more recently cyberspace, to the final frontier of space.

This comes two years after NATO members, many of them concerned by China and Russia’s increasingly aggressive behaviour in space, declared space to be the alliance’s “fifth domain” of operations, after land, sea, air and cyberspace.

It’s a big club. And Russia isn’t in it.

It is vital here to note that NATO’s collective defence clause has only been activated once, when the members rallied behind the United States following the 11 September 2001, attacks.

And why is this important?

Because in 2014, Putin, who regards the collapse of the Soviet Empire as “the greatest geopolitical catastrophe of the century”, decided to annex Crimea from Kyiv.

Ukraine joining NATO thus fundamentally alters the risk versus reward equation for Putin when it comes to repeating his action in Ukraine, was he of such a mind.

Now let’s briefly examine the roots of the Ukraine-Russia conflict and the US’ role as Kyiv’s ally:

Ukraine was part of the Soviet Union until its 1991 collapse. Russia has ever since sought to keep its neighbour in its orbit. The separatist conflict in Ukraine’s eastern industrial heartland, known as the Donbas, short for Donetsk Basin, erupted in April 2014. That came a few weeks after Russia annexed Ukraine’s Crimean Peninsula following the ouster of a Moscow-friendly president by a popular uprising in Kyiv.

Armed rebels in the mostly Russian-speaking eastern region seized government buildings and proclaimed “people’s republics” in the Donetsk and the Luhansk regions, and the Ukrainian military and volunteer battalions moved to put down the unrest.

Ukraine and the West said Russia sent troops and weapons to the east to support the separatists. Moscow has denied those claims and insisted that Russians fighting alongside the rebels went there on their own.

Amid the hostilities, a Malaysia Airlines passenger jet travelling from Amsterdam to Kuala Lumpur was shot down on 17 July 2014, over eastern Ukraine, killing all 298 people on board. Dutch prosecutors allege it was shot by a Russian Buk missile from an area controlled by the Russia-backed separatists. Russia denied any involvement.

The United States and the European Union imposed sanctions on Moscow for its annexation of Crimea, which wasn’t recognised by most of the world, and its support for the separatists. The restrictions have halted the transfer of Western technology and blocked Russia’s access to global capital markets. Russia retaliated by banning most Western food imports.

The Kremlin has repeatedly vowed that no Western sanctions will ever force it to change its course on Ukraine.

US’ role as Ukraine ally

The United States has provided political, financial and military assistance to Ukraine, conducted joint military drills and regularly sent its ships into the Black Sea in a show of support.

In an April call with Russian president Vladimir Putin, Biden voiced concern over the Russian build-up near Ukraine and “called on Russia to de-escalate tensions.” The White House said Biden “emphasized the United States’ unwavering commitment to Ukraine’s sovereignty and territorial integrity.”

The Biden administration also in April announced an array of new sanctions on Russia including a ban for US financial institutions to buy Russian government bonds directly from Russian State institutions. Washington also ordered the expulsion of 10 Russian diplomats and targeted six Russian companies and 32 individuals with sanctions for trying to interfere in last year’s US presidential election, the massive SolarWinds hack and other activities.

For Russia and Putin, the implications of Ukraine joining NATO are as obvious as they are troubling.

It would put Russia squarely at odds with the US-led West and further widen the already considerable chasm.