A 24-year-old Kenyan woman, a 23-year-old Somalian man and a seven-year-old child tested positive after arriving at Hyderabad’s international airport on 12 December 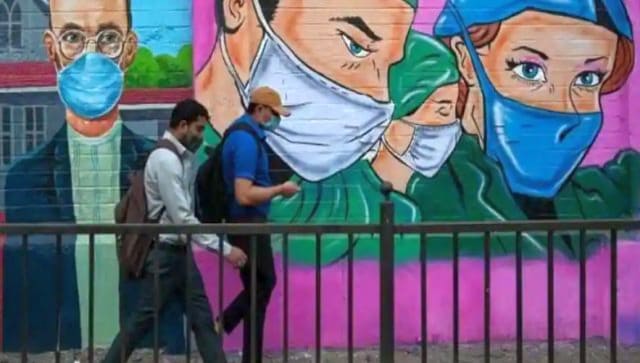 Pedestrians walk past a wall mural depicting health workers to spread awareness about the COVID-19 in Mumbai. AFP

The Omicron variant, which is spreading at an ‘unprecedented rate’, according to the World Health Organization, has found its way to Telangana with the state recording three cases on Wednesday.

According to reports, a 24-year-old Kenyan woman, a 23-year-old Somalian man and a seven-year-old kid, who arrived at the Hyderabad international airport on 12 December have tested positive for the new COVID-19

The seven-year-old has travelled to West Bengal, prompting the Telangana government to alert their Bengal counterparts.

With this, the tally of Omicron variant in India has crossed the 50 mark and stands at 64 on Wednesday.

Earlier on Tuesday, Rajasthan and Delhi both reported four cases each of the Omicron variant of the coronavirus

.
Confirming the same, Rajasthan’s health minister Parsadi Lal Meena was quoted as saying by ANI, “Four more Omicron cases have been reported. The health condition of these patients is stable. All the previous Omicron cases in the state have tested COVID-19

Delhi, too, reported four new cases, taking the total number of such infections to six in the national capital.
As of Wednesday, here’s how the Omicron tally stands: Maharashtra (28), Rajasthan (17), Karnataka (3), Gujarat (4), Kerala (1) and Andhra Pradesh (1) and Union Territories of Delhi (6), Chandigarh (1) and Telangana (3).

On Tuesday, alarm bells rang in Maharashtra when it detected eight more cases of the new COVID-19

variant, seven being reported from Mumbai and one from the metropolitan’s outskirts — Vasai Virar.

None of them has any history of international travel. However, one had travelled to Bangalore and another to Delhi, reported NDTV. All but one patient were vaccinated.

India reported its first cases of the Omicron variant in Karnataka’s Bengaluru where two people, including a South African national of Indian origin and a doctor, tested positive for it.

Meanwhile, a senior official has reportedly told Times of India that the country could see a major surge in Omicron cases during January-February. However, the infections would likely be mild.

The official, who made the prediction based on modelling studies, however, urged people not to panic as the disease appeared to be approaching a stage of endemicity — where transmissibility would be high, but not cause severe complications.

How China is reorienting its Africa policy, shifting focus from infrastructure to digital economy

India’s huge Ukraine drawback: To go along with US or Russia? | India Information

The genocide in Ukraine can’t grow to be unusual

Is Nitish Kumar set for one more U-turn? | India Information