The former world number one, playing his first singles match since March and his first at Queen’s since 2018 — he won the doubles at the Wimbledon warm-up tournament in 2019 — was barely tested by the moody Frenchman. 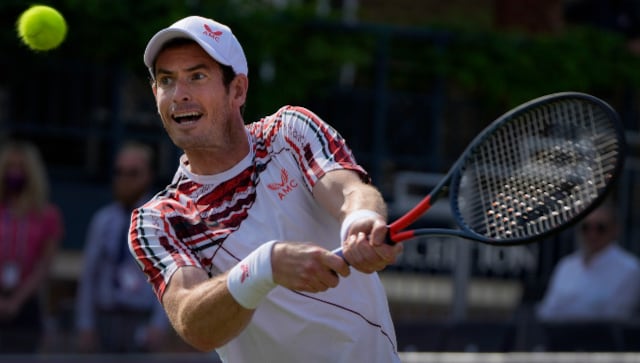 Former world No 1 Andy Murray in action during his first round meeting with Benoit Paire at the Queen’s Club tournament in London. AP

London: Andy Murray made a winning return to singles action on Tuesday, easing into the second round of the Queen’s grasscourt tournament with a 6-3, 6-2 victory over France’s Benoit Paire.

The former world number one, playing his first singles match since March and his first at Queen’s since 2018 — he won the doubles at the Wimbledon warm-up tournament in 2019 — was barely tested by the moody Frenchman.

The 34-year-old Scot, who has been suffering from a groin injury, had one nervous moment when he went down on all fours early in the match.

However, he picked himself up and easily dealt with anything thrown at him by Paire, whose most notable feature was that his purple top blended in with the sponsor’s backdrop.

“The body is old but I did quite well in terms of my movement,” said Murray, who has won Queen’s, in London, five times.

“My first (singles) match on grass in three years and I played only three or four practice sets before this so I did not know how I would feel.”

The three-time Grand Slam champion, who has struggled with injury problems, slipping to 124th in the world, wiped away a tear when asked what it was like to be back competing.

“I love playing tennis,” he replied, adding: “Competing is why you put in all the hard work. It is great to be out here and compete here.”

A far greater test awaits Murray in the second round in the shape of world number nine and top seed Matteo Berrettini.

“It will be a great test for me,” said Murray. “Berrettini is a top player and comes here having had a really strong French Open.”