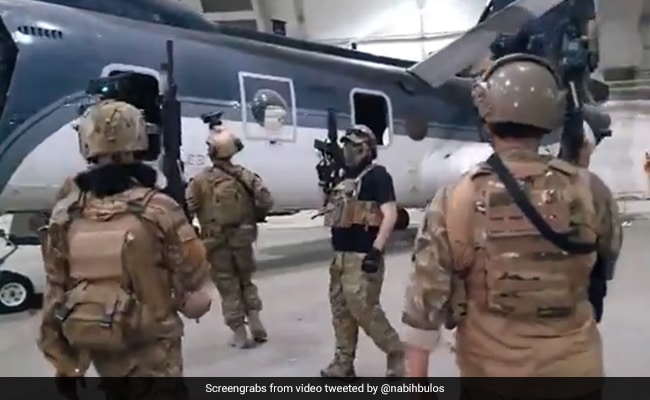 Taliban Takeover: At least ten Talibanis can be seen entering the Kabul airport hangar in the clip

Taliban fighters enter a hangar in Kabul airport soon after the United States military left Afghanistan and start examining Chinook helicopters, in a video that has been shared on social media.

The US completed its withdrawal of troops from Afghanistan today ending a 20-year-long war – the longest America has seen.

The journalist, Nabih Bulos, who filmed the video, is seen with at least ten armed Talibanis entering the hangar as they walk towards the choppers.

“Now, they (Taliban) are taking over,” Mr Bulos is seen telling in the video.

The 28-second clip has been viewed over 2.5 million times on Twitter with users expressing concern about the choppers being left there.

A US general however said that the military has disabled scores of aircraft and armoured vehicles as well as a high-tech rocket defense system at the Kabul airport before it left.

“Those aircraft will never fly again… They’ll never be able to be operated by anyone,” he said.

The US withdrawal from Afghanistan came after a frantic and risky mission in the last few days to evacuate thousands of Americans and Afghans after the Taliban took over the country.

The withdrawal date came before August 31 – the date US President Joe Biden had set to end the war in the country plagued by conflict for decades. But last week, at least 85 people, including 13 US soldiers, were killed after twin blasts outside the Kabul airport. The ISIS had claimed responsibility of the attack.

The hardline Taliban took over Afghanistan around two weeks ago, two decades it was toppled when the US invaded the country in retaliation for the carnage on September 11, 2001.

Their return triggered an exodus of terrified people aboard US-led evacuation flights. The evacuation flights have taken more than 123,000 people out of Kabul airport, according to General McKenzie, but he admitted not everyone who wanted to leave was able to.

Please Take Leonardo DiCaprio, Jennifer Lawrence Seriously. A Comet Is About To Shatter The Earth