Probe flags around 1 lakh ‘fake’ COVID-19 test results; an overview of the controversy

The labs allegedly put out fake COVID test results to meet the daily testing quota of 50,000 tests set by the Uttarakhand High Court during the Kumbh 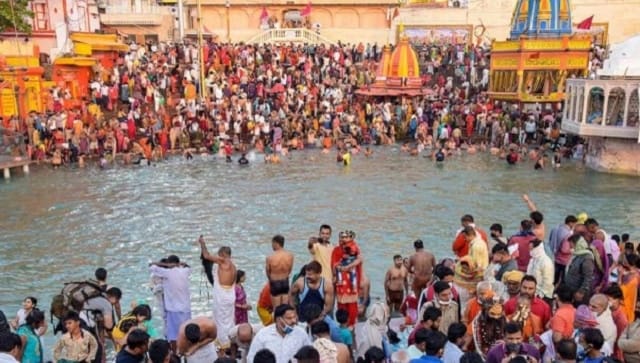 File image of Kumbh Mela at Haridwar in Uttarakhand. PTI

A large number of the four lakh COVID-19

test results issued during the Kumbh Mela in Haridwar may have been fake, as per a preliminary probe by the Uttarakhand health department.

The controversy, which has erupted two months after the congregation took place in the middle of the second COVID-19

wave, may snowball further as the probe deepens.

Here are the key aspects of the row:

How many tests are alleged to be fake?

The preliminary probe suggests that at least one lakh coronavirus

test results issued by private labs during the Kumbh Mela may have been fake, as per a report by Times Now. The labs reportedly did so to meet the daily testing quota of 50,000 tests set by the Uttarakhand High Court during the Kumbh.

Who is conducting the probe?

A committee headed by Chief Development Officer Saurabh Gaharwar has been constituted to look into the allegations and submit a report within 15 days.

A detailed probe was ordered by the Haridwar administration after preliminary investigations revealed that many private labs roped in by the district health department issued fake COVID test reports in the name of random people on the basis of their identity cards and phone numbers.

What are the allegations?

test results during the congregation, as per media reports. The probe has found that in one instance, a single phone number was used to register over 50 people, as reported by The Times of India. One antigen kit was also shown to have tested about 700 samples, although the kits have an exclusive number and are meant for single use.

The controversy arose after the ICMR flagged the case of a Punjab resident to a senior health department officer in Uttarakhand. A report in The Indian Express quoted sources as saying that the person, who was in Punjab during the Kumbh period, received an SMS that his sample had been collected for a COVID-19

test. He alleged that his Aadhaar and mobile number had been misused for a fake test.

What could be the fallout?

Payment to all labs which had been assigned the responsibility of conducting tests —RT-PCR and rapid antigen — during the Kumbh has been withheld for the time being due to the ongoing investigation, Haridwar District Magistrate C Ravishankar has said.

Haridwar’s Chief Medical Officer, SK Jha, was quoted as saying by PTI, “The Kumbh area extends up to Rishikesh. Until the probe ordered by the district administration is complete it is difficult to say at what level the alleged irregularities were committed.”

Thus, it remains to be seen as to who will be held responsible for the alleged fake test results, and whether any criminal action will follow.