Pliskova had never been beyond the fourth round at Wimbledon but showed great resilience in coming from behind to beat second seed Aryna Sabalenka 5-7, 6-4, 6-4. 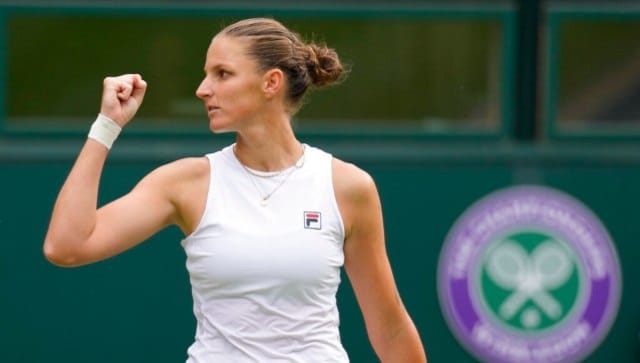 Karolina Pliskova reacts during her semi-final match against Aryna Sabalenka at Wimbledon 2021. AP

London: Karolina Pliskova of the Czech Republic will play Australia’s Ashleigh Barty in Saturday’s Wimbledon final after both players reached the championship match for the first time on Thursday.

Pliskova had never been beyond the fourth round at Wimbledon but showed great resilience in coming from behind to beat second seed Aryna Sabalenka 5-7, 6-4, 6-4.

It was a rare feat by Pliskova as in the previous 33 semi-finals only two players had reached the final after losing the first set.

For the 29-year-old eighth seed it is her second Grand Slam final — she lost the 2016 US Open — and she is the first Czech finalist since Petra Kvitova won her second title in 2014.

“It sounds amazing to be in the final as I never got past the fourth round here before,” said Pliskova who squandered all eight break points she created in the first set.

“I had so many chances in the first set and I got frustrated. A lot of credit to her, she played a great match.

“I’m super happy to have found a way to win.”

“She plays so fast. I didn’t have time to think about what I needed to do. She’s super powerful.”

Ashleigh Barty said she would be able to experience for real a childhood dream of playing in the Wimbledon final after she produced an impressive display to beat 2018 winner Angelique Kerber 6-3, 7-6 (7/3) on Thursday.

The 25-year-old Australian will play former World No 1 Karolina Pliskova in Saturday’s final.

“Angelique brought the best out of me and now I have a chance on Saturday to live out a childhood dream,” said Barty in the immediate aftermath of her victory.

Barty is the first Australian woman to reach the final since her idol and mentor Evonne Goolagong Cawley won her second Wimbledon title in 1980. “It’s incredible, it was as close to as good a tennis match that I have ever played,” said Barty who fired eight aces and 38 winners.

“It was a hell of a match from the first ball.”

“I am really proud of myself and my team. It’s been an incredible journey, full of ups and downs.”

Barty recovered from 1-4 down in the second set to triumph and move one win away from capturing a second Grand Slam title after her 2019 French Open victory.

Barty was able to put together a sequence of winning points that Kerber was unable to match — twice rattling off 10 points in a row.

Kerber, also a former Australian Open and US Open champion, saw her 10-match win streak end at the hands of Barty.

However, the 33-year-old will be encouraged that she has perhaps turned around a slump which began after her 2018 Wimbledon triumph.

Thursday’s semi-final appearance was her best performance at a Grand Slam since that title victory three years ago.

Oman suspends flights from 24 countries including India, Pakistan and Singapore

Indian-American Sahith Theegala endears himself to everybody together with his model of golf and smile-Sports activities Information , Firstpost