Italy failed to qualify for the 2018 World Cup but are now on a 28-match unbeaten run under Mancini. 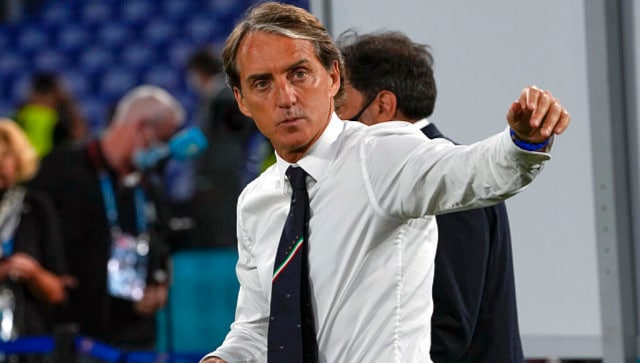 Italy’s manager Roberto Mancini walks off the pitch at the end of the Euro 2020 game against Turkey. AP

Rome: Roberto Mancini hailed Italy’s 3-0 Euro 2020 opening victory over Turkey as “an important win” but warned there is still a long way to go until a possible Wembley final.

“It was important to start well in Rome and I think it’s a satisfaction for the public and for Italians,” said Mancini of the match played at a Stadio Olimpico that was filled to a quarter of its capacity.

“It was a beautiful evening, I hope there are many others, but there are still six more for Wembley.”

Italy failed to qualify for the 2018 World Cup but are now on a 28-match unbeaten run under Mancini.

“We played a good match, even in the first half without being able to score. A great team. There was a lot of help from the crowd.”

Ciro Immobile and Lorenzo Insigne both scored after an own-goal from Turkey defender Merih Demiral had given Italy the lead — all in the second half.

“The coach has created a great group in which there are no starters and bench players and each one of us is always ready to sacrifice for our teammates,” Insigne said. “Winning is the most important thing – if I score, even better. It was a great night.”

“Games are not won by chance,” Mancini added. “We’ve improved a lot but we can still improve more.”