VK Paul, head of the national COVID-19 task force, also called on states and UTs to conduct serosurveys, saying that the country can’t depend on one national serosurvey alone 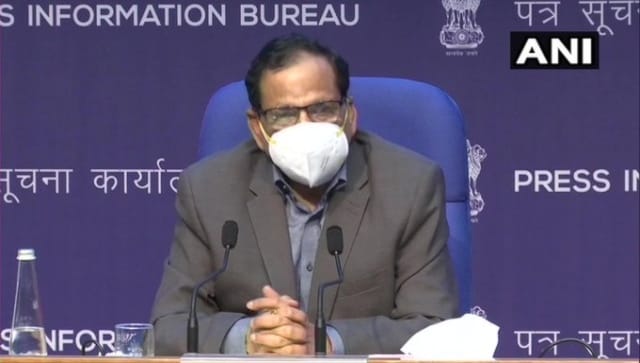 File image of VK Paul during a press conference on the COVID-19 situation in the country. ANI

New Delhi: The ICMR’s fourth round of national-level serosurvey to assess the intensity of the spread of COVID-19

in India will begin this month, but all states/UTs should also be encouraged to conduct them so that information from all geographies can be collected, the Centre said on Friday.

At a press conference, NITI Aayog member (Health) VK Paul said the Covid situation in the country appears to be stabilising with decline in daily and active cases and the positivity rate coming down to almost 5 percent.

He, however, urged people to continue following the Covid appropriate behaviour and social distancing norms.

. But if we want to protect our geographies, we cannot depend on one national sero survey alone and will have to encourage states/UTs to do serosurveys at their levels also,” Paul said.

According to the Indian Council of Medical Research (ICMR), the sero survey will be held across 70 districts in 21 states and will include children aged 6 years and above.

Speaking about the improving COVID-19

cases has been noted in India since the highest reported peak in daily cases on 7 May.

positivity rate since the highest such rate was reported between 30 April-6 May at 21.6 percent.

The official noted that there has been 70 percent decrease in active cases, by more than 26.2 lakh, since the peak was reported on 10 May.

The Centre underlined that breaking the chain of transmission ensures lesser strain on the health infrastructure and better quality of care.

There should be no laxity. Gatherings have to be avoided and partying time has not yet come, Paul said.

Covaxin, the health ministry said, We respect each country’s regulatory system, but it will have no impact on India’s vaccine programme.

In a setback that could potentially delay the launch of Covaxin in the US, the FDA there has “recommended” Ocugen Inc, the US partner of the Indian vaccine maker, to go for Biologics Licence Application (BLA) route with additional data.

Commenting on the development, Paul said each country has its own regulatory system which India respects and hoped that the manufacturer will be able to comply with it by doing whatever requires to be done.

“Each country has its own regulatory system. Some parameters might be common while some might be different which we respect. Our country’s regulatory system also takes decisions in a similar manner. The scientific framework is the same but nuancing is on context… These are scientific considerations, especially in those countries where science is strong and for us manufacturing is strong.

“We expect that our manufacturer will be able to comply with it by doing whatever it requires to be done. It will have no impact whatsoever on our programme clearly. We are satisfied our regulator has approved it. We have so much data on safety and so much data on phase-3 trial that has been screened by them,” he added.

He further said that the phase 3 trial publication of Covaxin will also come in next 7-8 days.

“We are doing very well. We respect their decision, but it will have no bearing on our track at this moment,” he added.

Paul said in the next six months, Biological E’s vaccine can come and Zydus Cadilla’s DNA vaccine is likely to come too, and Genova RNA vaccine and J& J production can take place here.

“The vaccine development uses cutting edge technology which has helped in increasing Indian scientific community’s grasp over the subject and two specific example is mRNA technology and this is a very significant development and BioE has adapted technology with a Canadian firm, and these mRNA vaccines will be made and they can also tackle the variants. This technology is not of a company, but of the country, and as and when need arises it will be cloned,” he said.

“Then there is DNA technology which is being brought forward by Zydus. The whole trial has been done and it is path breaking and if it succeeds then a new platform will emerge. So this effort made in the country is extraordinary, exceptional and unprecedented,” he added.

On vaccine passports’, Agarwal said technical discussions are going on in WHO over it.

“Vaccine passport is having a common understanding under which vaccines you have been administered gets approved, now the issue is the World Health Organisation (WHO) which is supposed to take this initiative…technical discussions are going on there and its evidence is being studied,” he said.

Regarding travelling abroad, he said, the focus around the world is to undertake testing before one goes out and that model will continue.

On increase in gap between the first and second dose of Covishield, the official said Covishield’s length of period based on existing evidence was increased, but for those who have to go abroad it was changed so if one month has elapsed then they can go.