Loni Circle Officer Atul Kumar Sonkar said a case had been filed against the accused, based on the elderly man’s complaint 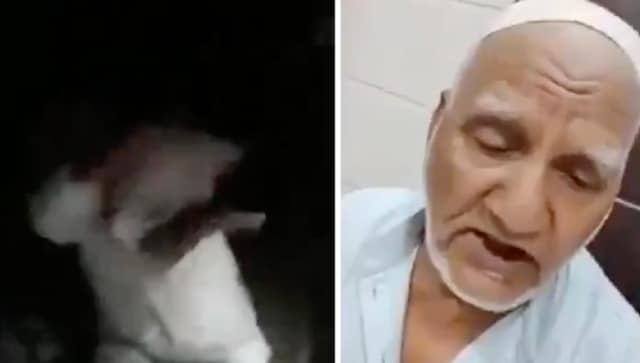 A screenshot from a video of the incident. Twitter/@unknwnn_gir

An elderly Muslim was reportedly beaten up in a town in Uttar Pradesh’s Ghaziabad district on 5 June. One of the accused in the case even cut off the man’s beard, purported videos circulating on social media showed on Monday.

According to Indian Express, the victim, identified as Abdul Samad, a resident of Bulandshahr travelling to Loni, alleged that he was targeted because of his religion.

He was on his way to a mosque in Loni town on 5 June when the incident took place, as per NDTV. The main accused in the case has been arrested.

The video of the incident, which was widely circulated on social media, purportedly shows one of the accused thrashing the elderly man, who is pleading with them.

He alleges that goons put gun on his head, he was forced to chant Jai Sri Ram and they brutally beaten him, assaulted & chopped off his beard.#Islamophobia

He was allegedly kidnapped by miscreants who took him to an isolated place, assaulted him, and forced him to chant ‘Jai Shri Ram’ and ‘Vande Mataram‘.

The accused in the video has been identified as Pravesh Gujjar, a resident of Ghaziabad.

As per the Indian Express, the police, at present, are investigating if he has any prior criminal history.

The man later released a video describing the attack. “They kicked and punched me and forced me to shout ‘Jai Shri Ram’,” he said, breaking into tears. “They put a gun to my head and said they’ll kill me. They continued to beat me for hours and I kept screaming.”

Loni Circle Officer Atul Kumar Sonkar said a case had been filed against the accused, based on the elderly man’s complaint. “The main accused is presently detained in jail and further action will be taken in the case by arresting the other accused,” he added.